Skip to content
Home » Indranee to Jamus: What matters is having wealth tax policies that work in each jurisdiction
Current Affairs

Indranee to Jamus: What matters is having wealth tax policies that work in each jurisdiction

Let’s be clear at the outset that the Singapore Government is not opposed to taxing wealth. Speaking in Parliament, Second Minister for Finance Indranee Rajah said that the Government is constantly looking for ways to be able to supplement our revenue but to do that in a way that strikes the right balance.

The Minister was reponding to WP Jamus Lim who proposed a tax of 0.5% on net wealth in excess of $10 million, 1% above $50 million and 2% above $1 billion. Jamus also cited the example of Switzerland which, he said, taxed wealth aggressively. 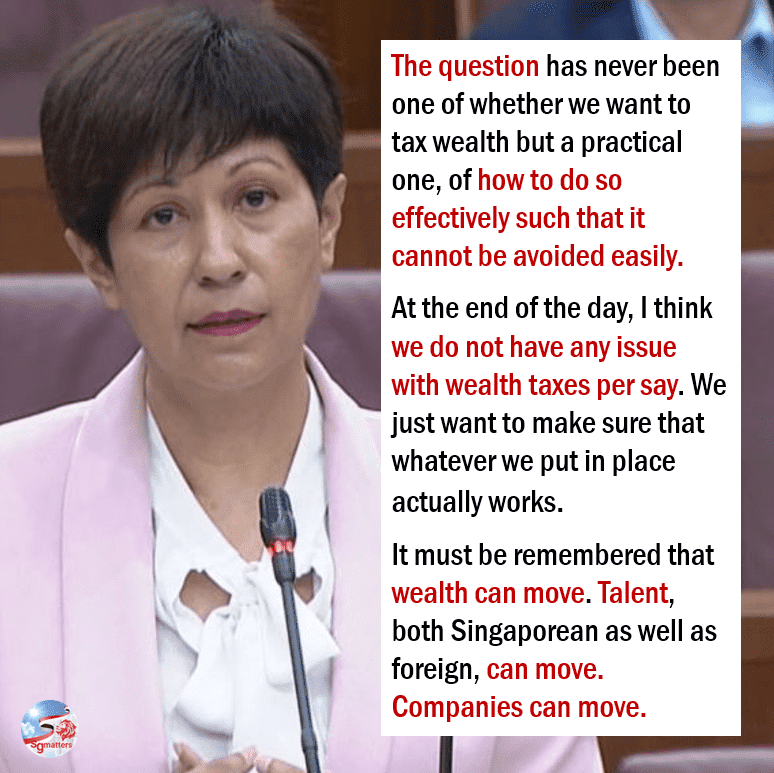 Ms Indranee pointed out that it is not about having more types of wealth taxes per se. Rather, what matters is having wealth tax policies that work in the context of each jurisdiction.

The Government will continue to review the wealth tax.

“The question has never been one of whether we want to tax wealth but a practical one, of how to do so effectively such that it cannot be avoided easily,” she said.

“At the end of the day, I think we do not have any issue with wealth taxes per se. We just want to make sure that whatever we put in place actually works. It must be remembered that wealth can move. Talent, both Singaporean as well as foreign, can move. Companies can move.

So, we have to tax in a way that is competitive and allows people and companies to generate revenue in order to encourage them to stay here and that revenue can then be used and reallocated and distributed,” she added.

Singapore has one of the most progressive system of taxes and transfers in the world. It is competitive, fair and sustainable. It not only raises revenue but also keeps our economy dynamic, builds an inclusive society and enables a greener future, said Ms Indranee.

Almost half or 50% of our workers do not need to pay any Personal Income Tax.

Of those who do, the top 10% of individuals account for about 80% of the total revenue.

Over the years, real income has grown.

The top 20% resident households, foreigners residing in Singapore and tourists account for over 60% of net GST collected.

“And when we consider the entire system of taxes and transfers, for every dollar of tax a Singaporean household around the middle pays, they will receive around twice the amount in benefits. Lower-income households receive even more – about $4 in benefits for every dollar paid,” Ms Indranee revealed.

“This compares favourably with other jurisdictions, such as the UK and Finland, where middle-income households receive only $1.25 of benefits for every dollar of tax paid,” she added.

“Our overall tax burden is low. Our taxes as a percentage of GDP are only 13%, much lower than the OECD average of 34% and the Asia Pacific average of 21%,” Ms Indranee said.

This matters because ‘it keeps the tax burden on people and businesses low and let them retain most of what they earn’, said Ms Indranee. “It keeps the economy dynamic and thus creates good jobs for our people.”