Extremely important to maintain trust in the media: Shanmugam 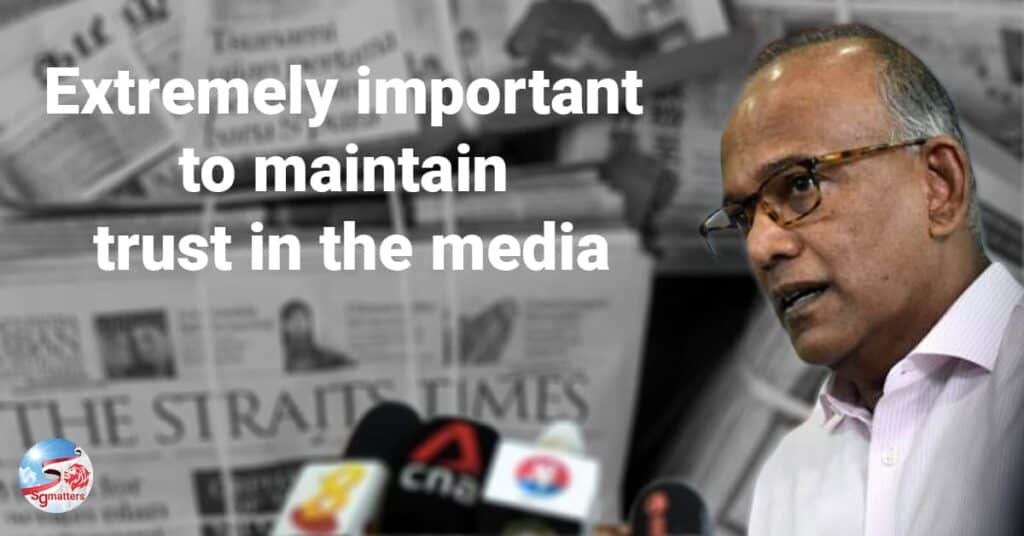 Law and Home Affairs Minister K Shanmugam said on Saturday (May 8) that it is extremely important to maintain trust in the media.

Trust is of vital importance not just for the media but for governments and institutions, Mr Shanmugam said.

“In Singapore, we take great pains — if you look at the Government — to retain, maintain the trust of the people because, if there is no trust, we can’t govern well, we won’t be able to take long-term measures.

Mr Shanmugam said, “Media businesses in most countries are under pressure. Many newspapers in Europe, the US have closed. Many others have been restructured, including some of the best-known international newspapers.”

Both the Chicago Tribune and Denver Post, for example, had to be saved from bankruptcy. Others like the Washington Post and the South China Morning Post are bought over by billionaires, Jeff Bozos and Jack Ma respectively.

Mr Shanmugam noted that the French government has provided hundreds of millions of euros in support, both direct and indirect, to the press every year. It also commissioned a report in 2010, which said that the country’s press was being kept in a state of “permanent artificial respiration”.

Hiving off its media business into a not-for-profit entity and restructuring the company into a company limited by guarantee will allow it to receive funding from private and public sources, including extra financial support from the Government.

Independent surveys such as the Edelman Trust Barometer have shown that Singapore ranks higher than other developed countries – including the United States, United Kingdom and Japan – on this topic.

Around 62 per cent of respondents in Singapore trust the media to do what is right, compared with the global average of around 51 per cent. A 2020 survey by YouGov also found that seven in 10 people here trust local media reporting on Covid-19, compared with three in 10 in the UK.

‘Trust’ is important and it is extremely important for media to maintain this trust through high-quality journalism.