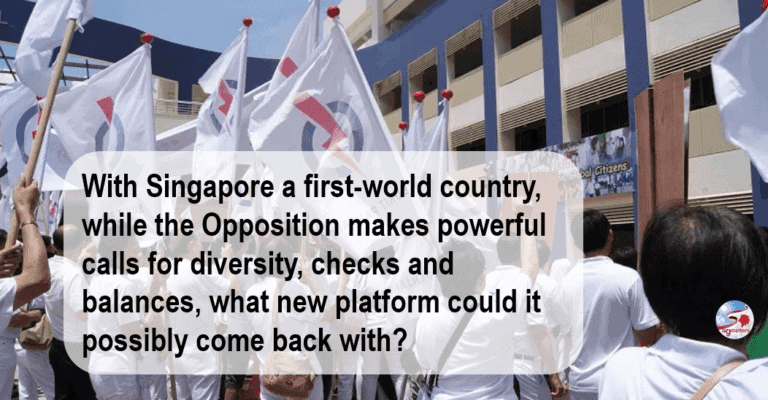 Quora writer Bill Chen suggests that for PAP to rebound in GE2025, it will have to give voters what they want, and that is ‘politics’.

Here’s what he wrote:

First, what has been going wrong for the PAP?

Beyond the leaking tap syndrome, the PAP has failed to give voters what they want.

The younger voters want politics and not governance.

They hope to see an injection of excitement and drama in parliament, or as you put it, diversity.

Unfortunately, it means the government will have to divert resources from governance to politics. This was what Lee Kuan Yew and his successors fought so hard against because there is so much work to do merely keeping Singapore up on the tightrope.

Read also  Can PAP just let success speak for itself?

Singapore is too small to enjoy any kind of cushion. One misstep may be a step back for a bigger country. It can be fatal for us. No one will put us into another basket of consideration just because we are small.

Instead, it is drowning in their spit or being insignificant as nasal discharge.

The average minister fronting a GRC will have to embrace today’s realities even more. You don’t exist to the younger generation without social media presence. Beyond delivering on the technocrat front, one will have to win on the political front–every day.

Unfortunately, the public not only judges the opposition on different scales, but they also don’t even share realities. No opposition has to put in the hard work of governance or take responsibility for policies enacted.

When policies don’t, the opposition reaps publicity and scores points against the establishment.

The only way to win is to focus on the other P.

Over the long run, people tend to get what they want.

May 13, 2022
PrevPreviousAnd let’s not yell unfair hiring, just bcos we weren’t hired
NextOur police officers are not out to brutally injure anyone; they are here to protect life and propertyNext
On Key