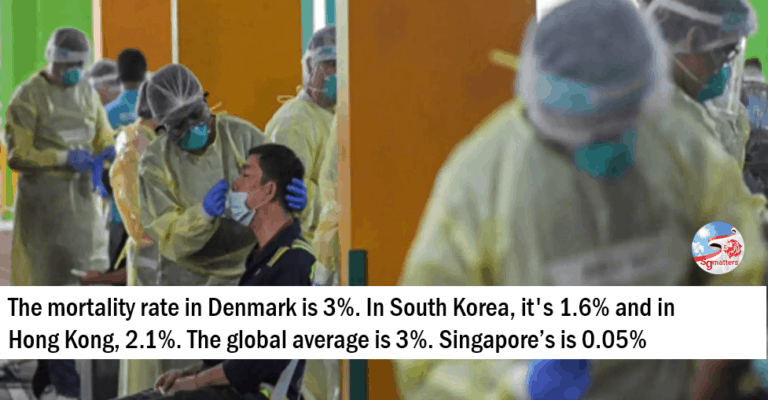 'Aggressive mass testing', 'contact tracing', 'a pre-emptive approach to treatment' are some of the reasons mortality rate is lowest in Singapore.

This represents 0.05% of the total number of confirmed infections. No deaths have been reported for more than 2 months according to the Ministry of Health.

At 0.05%, the mortality rate is the lowest in the world according to a compilation of data by Reuters from countries with more than 1000 recorded cases.

“The more we diagnose, then the lower the mortality rate is,” said Hsu Li Yang at Saw Swee Hock School of Public Health at the National University of Singapore.

There are a few factors that contribute to the low mortality rate.

The vast majority of the infections –  about 95% – are among migrant workers living in dormitories. These are mostly young men in their 20s and 30s. The impact of COVID-19 tend to be less severe on healthy young individuals. Most confirmed cases from the dormitories show either few symptoms or are asymptomatic.

Singapore has conducted nearly 2.5 million swabs. Of these, nearly 900,000 swabs representing more than 15% of Singapore’s population, were done on unique individuals. This is the highest per capita rate globally according to Reuters.

Singapore’s early detection via aggressive testing and contact tracing has won it accolades from WHO.

With all dormitories cleared, migrant workers are now placed on a rostered testing routine where every worker will be tested – every 2 weeks – for the virus. This allows for early detection. Close contacts of positive cases are quarantined and tested as well. This helps to ringfence potential clusters and break the chains of transmission.

Read also  Migrant workers to be tested every 14 days: MOM

Mass testing in the community

In addition to mass testing of vulnerable groups such as residents of homes and shelters, all individuals age 13 and older who show up at clinics with acute respiratory symptoms will be tested for COVID-19.

The rapid set up of isolation care facilities has prevented the healthcare system from being overwhelmed while providing a high level of medical care to patients with mild symptoms and those waiting to be discharged. In addition to this, Singapore has also taken a pre-emptive approach to treatment. Older patients and patients with underlying conditions are cared for in hospitals.

Dale Fisher, a Senior Consultant in the Division of Infectious Diseases at the National University Hospital said, “Our care is conventional but done well; fluid management, anticoagulation and both proven drugs and participation in drug trials.”

In general, Singaporeans have taken well to wearing masks. They understand the importance of the masks in preventing the spread of the virus.

“We have adopted a good mask culture in Singapore. This makes the disease milder,” Dr Leong Hoe Nam, an infectious diseases expert at the city’s Mount Elizabeth Hospital, said.

May 13, 2022
PrevPreviousSingapore researchers discover mild strain of COVID-19 that’s no longer circulating here and they are excited
NextTurn that uproar into a roar of support! Join the challenge and raise awareness of youth mental health!Next
On Key