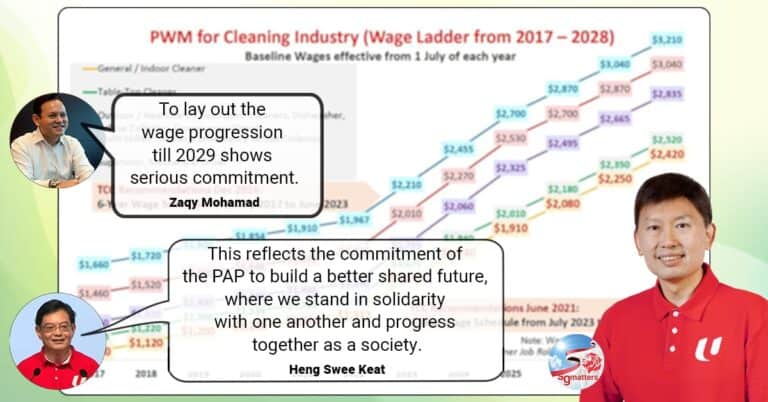 Cleaners can look forward to higher wages over six years from 2023, after proposals by the Tripartite Cluster for Cleaners (TCC) were accepted by the Government on Monday (Jun 7).

The move is expected to benefit about 40,000 resident cleaners employed by more than 1,500 cleaning businesses.

“This is a timely and necessary review to recognise the importance and higher value of work shouldered by our cleaners, particularly during the COVID-19 pandemic,” TCC and NTUC said in a joint media release.

The Progressive Wage Model (PWM) is derived from extensive discussions with industry stakeholders. This ensures win-win outcomes for both workers and companies.

It takes into account improvements in workers’ wages, career advancement and skills upgrading, while ensuring that companies can remain productive and competitive.

“What we aim to achieve in Singapore through our tripartite partnership is to have a growing economy which is both pro-business and pro-worker,” Deputy Secretary-General of NTUC Chee Hong Tat said in a Facebook post.

“Today’s announcement by the Tripartite Cluster for Cleaners (TCC) builds on the earlier schedule of base wage increases that is in place till 30 June 2023,” he said. “We are going further with the latest moves to uplift the wages and enhance progression opportunities for our cleaners,” he added. 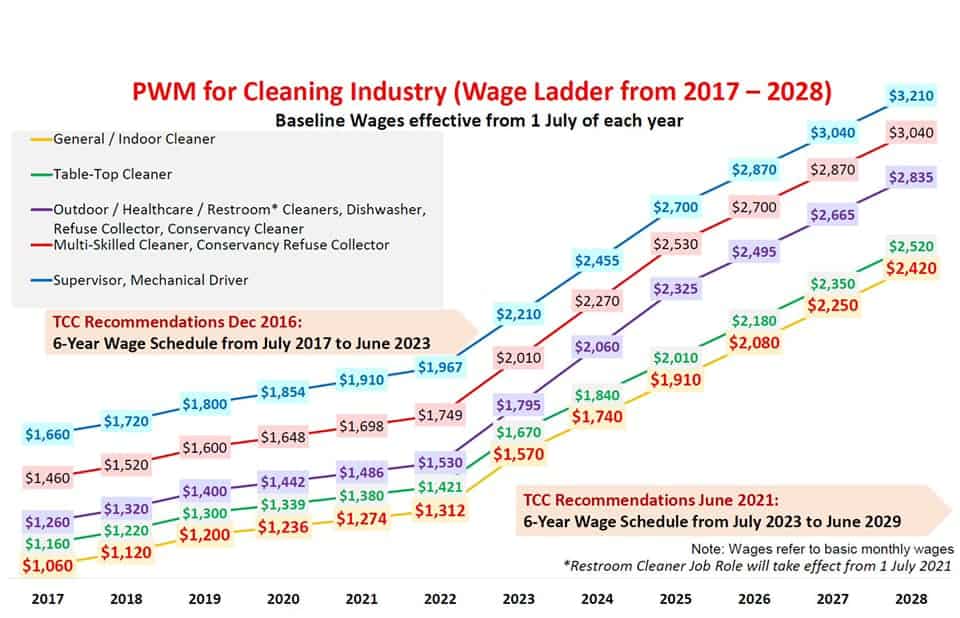 Mr Chee said, “This is ultimately a whole-of-society effort, as the PWM is not only an economic policy but an important part of our social compact,” Mr Chee said.

As such, he urged everyone to support these efforts through our purchases as consumers, and to signal to companies that we are prepared to pay a little more for essential services so that our workers can earn higher wages.

Cleaning as a possible career

The “aggressive wage increase” not only reflects the value of the work cleaners do, it also attempts to narrow the gap between their wages and the salaries of other workers, said Mr Zainal Sapari, Assistant Secretary-general of NTUC.

“We want to attract a younger workforce into this industry. We want this to be a possible career that they can consider, compared to going into the gig economy,” Mr Zainal added.

Sharing in the excitement is Senior Minister of State (Manpower) Zaqy Mohamad who said that the government welcomes these recommendations. He noted that laying out the wage progression till 2029 shows serious commitment and commended the TCC for its hard work,

“Special thanks to Chairman of the TCC Brother Zainal Bin Sapari who has been a tireless champion for our cleaners, as well as the employers who lent their support,” said Mr Zagy.

Member of Parliament Mohd Fahmi Aliman (PAP-Marine Parade), who is a member of the workgroup said, “In this pandemic, most of our workers, or cleaners are out there on the frontline … we really need to show a commitment and our gratitude for what they’ve done, keeping Singapore safe.”

“I am glad that many of us are more aware of the value of work our cleaners do. It is only apt that we recognise their contributions. Pandemic or not, uplifting the lives of our lower-wage workers matters to us,” said NTUC secretary-general Ng Chee Meng in a Facebook post after the announcement.

May 13, 2022
PrevPreviousCleaning Firm Gives Out Special Pandemic Bonus of Almost $1 million
NextMaking a case for the cleaners through the Progressive Wage ModelNext
On Key