If you miss Robinsons, you’re not alone! ICYMI, Robinsons has once again opened its “doors” to shoppers last week – virtual doors, that is! Just in time for the season of sales. PSA: They are currently having their relaunch sale! 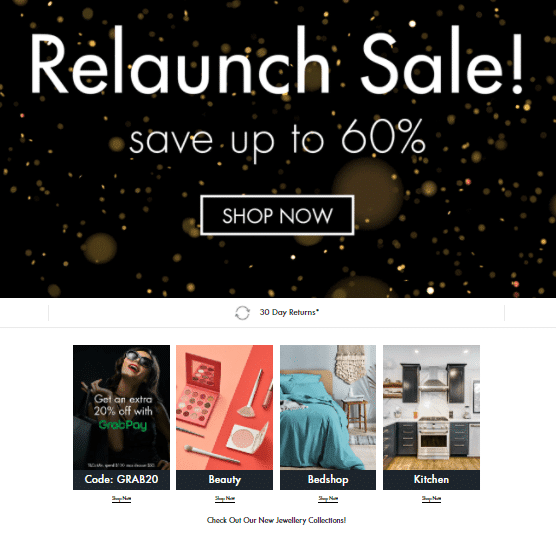 Five months ago, in a move that surprised many Singaporeans who grew up with the brand, Robinsons threw in the towel. Robinsons closed down their last two physical department stores at The Heeren and Raffles City Shopping Centre after 162 years. The decision was said to be prompted by factors including changing consumer tastes and rental fee pressures.

Inability to continue operations due to weak demand at department stores.

Then, the company employed some 170 staff in Singapore. The news came as a shock to many of them. Since then, corporate advisory and restructuring firm KordaMentha has been working with the Singapore Manual and Mercantile Workers’ Union, the National Trades Union Congress’ Employment and Employability Institute and the NTUC Job Security Council to support employees.

According to a report from The Straits Times, for its reopening, Singaporeans, including past staff, are being hired to fill various positions. Ms Jane Lee, 54, and Ms Margaret Chew, 61, are the first two Singaporean rehired. They have a combined experience of almost 60 years as Robinsons’ employees.

The rehiring came as a “shock” to them as neither expected to be rehired. Ms Lee was regional operations manager when she left, and has rejoined as general manager for merchandising and supply chain.

E-commerce as the future? But there is still demand for physical retail stores.

While some have exited the scene when it comes to physical retail stores, other retailers are still expanding amid the pandemic. More people are working from home have given new opportunities to retailers who cater to them. For instance, changing consumer needs as more people look to home furnishings to upgrade their living spaces.

“As Singaporeans spend more time at home, they relook their sofa and decide to renew it, or look at their kitchen and plan for an overhaul. In the last 12 months, Ikea has seen strong sales specifically in work-from-home solutions, tableware, kitchenware and outdoor furniture.”

Ikea has since expanded with a third outlet in Jurong East in April this year. Next year, electronics and furniture retailer Courts will also be taking over all six storeys of The Heeren that were once occupied by Robinsons. This will be its largest outlet.

It appears that for many, retail stores are still relevant and new opportunities abound. Under the changing landscape, plans to support retail workers are also underway. Singapore is considering a progressive wage model for the retail sector. It will cover workers such as cashiers and salespeople of retail shops.  Retail workers account for about 3% of the workforce in Singapore. That’s 107,931 workers in the retail industry.

In a survey conducted by Workers of Singapore, about half of the 360 retail workers reported a monthly income of less than $2,300 a month. A whooping 74% shared that higher wages will be effective in attracting them to join the industry.

Will physical stores still be relevant in future?

Are people still keen on shopping in real life? Will there be a physical Robinsons department store in the future? Apparently, it’s not a hard ‘no’. Robinsons Online’s managing director Jordan Prainito has shared that they will “listen to the customers” when asked. We shall see. For one, I do miss the Robinsons Black Friday sales. Anyone with me?