Skip to content
Home » Respect privacy of family to give parents space to decide in their child’s best interest: joint statement
Parenting & Education

A student who identifies as a ‘male-to-female’ transgender girl claimed in a post on the SGExams Reddit page that he had been blocked from undergoing hormone therapy by Ministry of Education (MOE).

The student who is in his second year of pre-university education said in the post that he had been diagnosed with gender dysphoria at the Institute of Mental Health (IMH).

MOE has since responded saying that it was in no position to interfere with the treatment.

A further joint statement with IMH, released today, said that in treating individuals who are diagnosed with gender dysphoria, IMH clinicians will typically seek inputs from a wide range of stakeholders. 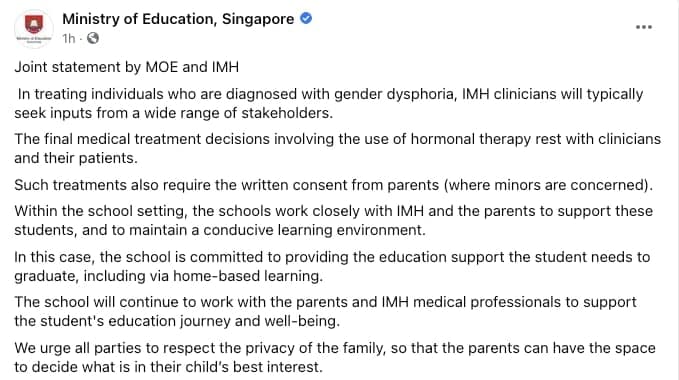 “The final medical treatment decisions involving the use of hormonal therapy rest with clinicians and their patients,” the statement said.

Where minors are concerned, such treatments require the written consent of parents.

The statement urges all parties to ‘respect the privacy of the family so that the parents can have the space to decide what is in their child’s best interest:

It also said that within the school setting, schools will ‘work closely with IMH and the parents to support these students, and to maintain a conducive learning environment’.

In the case of this student, the school is committed to providing the education support the student needs to graduate, including via home-based learning.

The school will continue to work with the parents and IMH medical professionals to support the student’s education journey and well-being.