FICA: Shanmugam disappointed there was no debate from WP on issues he raised 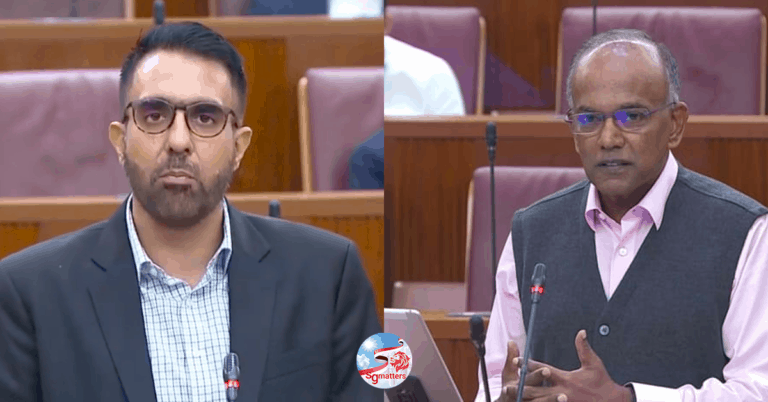 Rhetoric alone does not solve problems, Law Minister K Shanmugam said. The Workers’ Party came to Parliament armed with speeches but failed to engage pertinent points raised by Mr Shanmugam during the debate on FICA.

Giving the example of Gitmo in the United States, Mr Shanmugam said, “You can come to this House and have soaring rhetoric. Rhetoric has not solved the Gitmo problem of the United States. President Obama said, ‘The choice between liberty and freedom or security, liberty and security is a false choice’. Did he close down Gitmo? Why is it that we continue to be colonised in our minds that there is the only way of doing things properly?”

Speaking in Parliament (5 Oct 2021) during the debate on FICA, Mr Shanmugam noted that while Mr Pritam Singh spoke about the need for engagement and responding to feedback, the Workers’ Party has really not substantively engaged with anything that the minister had said.

“I said what is the answer to the problems we have – practical answers, not just rhetoric. I said we need to see how checks need to be made suitable for the context and the risks we face. I have not heard any answer.

I said how are you going to deal with the risks of leaks in open Court hearings or in-camera? No Answer. I would say not a squeak.

What are the objections to the Tribunal chaired by a High Court judge? No real answer.”

“So, what we had was not a debate because we are not dealing with these points,” Mr Shanmugam said.

“Parliament is not just a forum for reading out speeches with an intent of putting it out in social media eventually. We need to engage on the issues,” he added.

During the sitting, Mr Pritam Singh lectured the government on the doctrine of separation of powers and that the rule of law requires a system of checks and balances on the exercise of executive power.

To this, Mr Shanmugam said these principles are fundamental to Singapore. They are the principles that underpin much of our success.

“I said in my speech, the starting point is that the rule of law is fundamental to our existence and our well-being as a country,” Mr Shanmugam said. “And that is shown in our consistently high rankings on law and order indices and our good international standing. It is also fundamental to ensure that we have good investments; low unemployment; healthy economy.”

The reason we are all here is because this is a country run according to the principles of rule of law. We do not mind listening to lectures on rule of law but we subscribe to them too. But we then deal with real problems.” 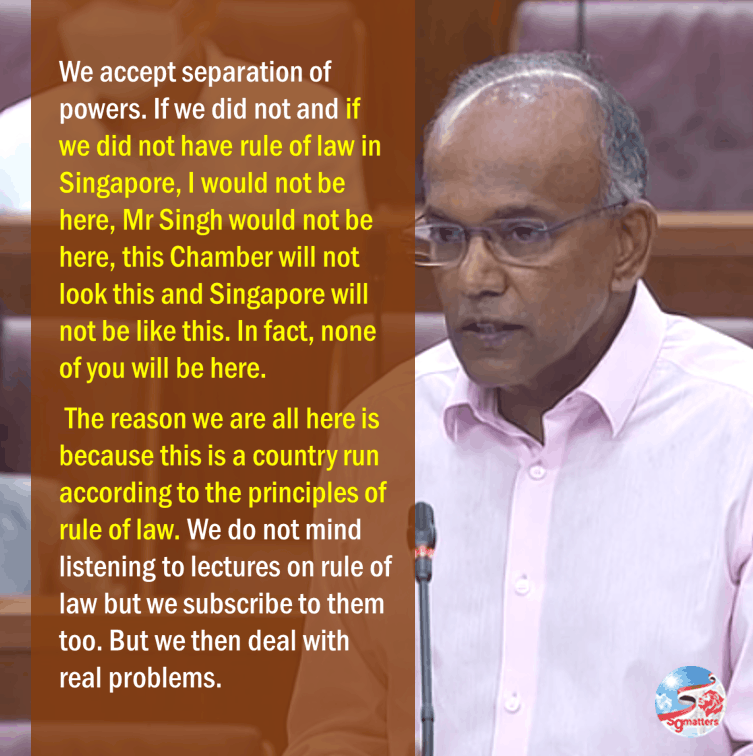 Mr Shanmugam said there is such thing called political will and political courage and there will have to be a recognition that judicial process will not be appropriate.

“Parliament is not just a place where you come and just because you see that there are some people who are saying certain things or you resort to rhetoric without offering real suggestions. It requires some courage to say this is a problem and we will deal with it. This is the way we will deal with it and offer solutions, alternate solutions.”

A judicial process will not be appropriate in matters that rely heavily on sensitive intelligence and collaboration with foreign counterparts. Many things cannot be publicly disclosed, Mr Shanmugam said.

And in so far as I have seen, the solutions, I have explained why the High Court process, open court process does not work and I have heard nothing in response,” the minister said.

May 13, 2022
PrevPreviousShanmugam responds to Pritam Singh who quoted him expressing concerns in 1989 over Government’s powers
NextLet’s have an honest conversation. FICA can protect Kirsten from herself.Next
On Key