Skip to content
Home » What is the key difference between WP’s formula and the White Paper’s proposal?
Politics

Our ministers’ million-dollar-salary is the broad and blunt tool of many an opposition supporter who draws it out of their toolkit as a final resort to hammer and smash everything in the way when left with no other alternative response.

But hey! Hold your fire (or hammering) as the WP had also proposed million-dollar salary for ministers.

“If there were a Workers’ Party government in power today, by their own formula the Workers’ Party minister would be paid essentially the same as what a minister today is paid. Mr Pritam Singh would pay himself that same amount,” Mr Teo Chee Hean said in parliament in 2018.

WHAT IS THE KEY DIFFERENCE BETWEEN WP’S FORMULA AND THE WHITE PAPER’S PROPOSAL?

The WP formula, in fact, would have had a higher fixed component of 81 per cent, and a smaller variable component, of 19 per cent.

This means the WP would have paid out a higher portion of the salary – about $880,000 out of $1.1 million, regardless of the individual performance of the WP minister or national outcomes, and even if the outcomes were not achieved. 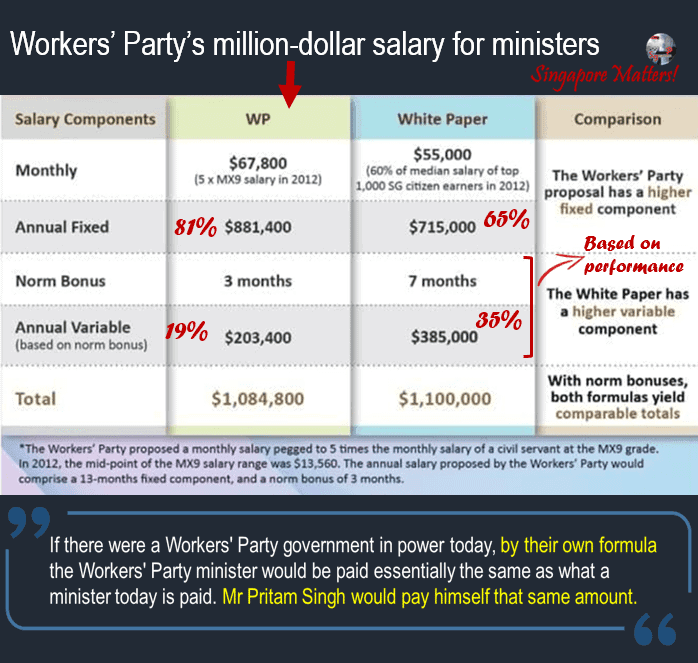 The variable component depends on the performance of the minister and the achievement of national outcomes and the state of the economy.

Notes:
In 2012, the WP had proposed a salary that is pegged to 5x the monthly salary of a civil servant at the MX9 grade.

In 2012, the mid-point of the MX9 salary range was $13,560. The annual salary proposed by WP would comprise 13-months fixed component and a norm bonus of 3 months.