A decision on the tudung by end August, in time for National Day Rally: PM Lee 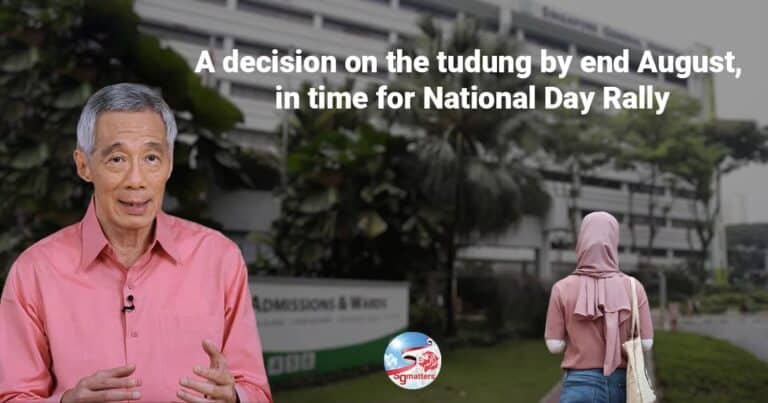 The community leaders knew that the government had been considering for quite some time now to allow Muslim nurses to wear the tudung because the government has been engaging them and consulting them quietly. PM Lee thanked them for walking with the government on this complex journey, and helping them to manage an issue that is important to Muslims.

He said the Government’s position on the tudung was not a fixed one. Over time, people’s attitudes, values and views have evolved. In work and social settings, the tudung is now more common. While the Government should prepare to make a move to allow Muslim nurses to wear the tudung with their uniform, more work needs to be done.

“Before we actually make the change, we have to prepare the ground. We have to make sure that everybody understands this is a careful adjustment, not a wholesale change, and we want people to realise what the limits are, as we make these changes,” he said.

“We must make sure that Singaporeans, both Muslims and non-Muslim, are ready to accept the move. We are a multi-racial and multi-religious country. It is a delicate balance, but we are fully committed to preserving our harmony and to maintaining our common space,” PM Lee added.

In making the change, PM Lee said they want to avoid creating unintended consequences when they make well-intentioned moves.

The change for Muslim nurses to wear the tudung with their uniforms can be done but it will take a bit of time, PM Lee said, adding that he has discussed the issue with the community leaders and have asked them to help with the process over the next few months.

“And I hope that by the National Day Rally, which will be at the end of August, we should be ready to make a decision, and I should have something to report,” he said.

Mufti Nazirudin Mohd Nasir who was among the leaders who attended the dialogue, said that the issue of wearing the tudung with the uniform is about balancing the needs of Muslim nurses who choose to put on the tudung while maintaining a high level of trust and confidence between communities.

“I think it is very important that on such matters, we should not make a move that can undermine our social cohesion, but instead continue to strengthen it and to enlarge our common spaces. This is something very unique in Singapore,” he said.

Minister-in-charge of Muslim Affairs Masagos Zulkifli told media after the dialogue that the Government has always empathised with the request by the nurses to put on the tudung in the uniform.

“The heart of the matter is how you strive a good balance in allowing our nurses to put on tudung within their uniform, so that this position can win the support of all communities and preserve our common space, at the same time strengthen our social cohesion,” he said.