COVID-19 Singapore: 2 clusters with 4 cases each in the community 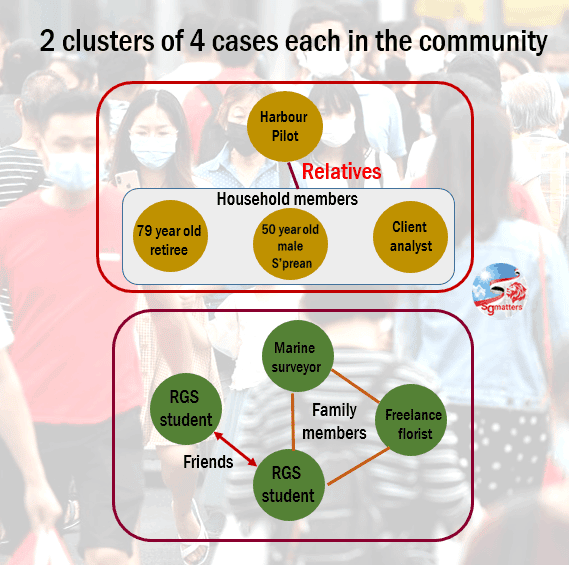 The Harbour Pilot is a 55-year-old male Singaporean. His work entails going onboard vessels to navigate them through congested waters. He is asymptomatic and was detected from our Rostered Routine Testing (RRT) of workers in the construction, marine and process sectors on 28 December. His test came back positive on 30 December and he was conveyed to NCID in an ambulance. His serological test result has come back negative, indicating that this is likely a current infection.

He stays at Marine Crescent and often visited his relatives who stay in a neighbouring block. It was revealed that on 13 December, he had visited Parkway Parade with 7 other individuals. Investigations are ongoing to assess if there had been any breach of the relevant prevailing safe management measures.

Three of his relatives who live in the same household have also been confirmed positive.

Two of them – the 79-year-old retiree and 50-year-old Singaporean developed symptoms on 28 December but did not seek medical treatment. They were tested after being placed on quarantine and confirmed positive.

The third relative, a client analyst, developed symptoms on 28 December and sought medical treatment at a general practitioner clinic the next day. She was advised by the doctor to take a COVID-19 test, but she did not do so. She was also given 5 days’ medical leave, during which she had to remain at home. She reported feeling unwell when she was placed on quarantine as a close contact.

The urge everyone to take the COVID-19 test when advised by their doctor, so as to allow them to identify infected individuals early and to quickly contain further spread.

The marine surveyor is a Singapore Permanent Resident. His work entails working onboard vessels docked at Sembcorp Marine Admiralty Yard.

He developed acute respiratory infection (ARI) symptoms on 27 December and sought treatment at a general practitioner clinic on 28 December where he was tested for COVID-19. He was confirmed to have COVID-19 infection the next day. His serological test results have come back negative, indicating that this is likely a current infection.

Two of his family members have also tested positive. One of them is a 14-year-old student from RGS.

Another RGS student has been confirmed positive. She is a friend of the first RGS student. On 27 December 2020, she visited the first RGS student at her home for a few hours. During that time, the marine surveyor was present as well. As she had been identified as a close contact of the marine surveyor, she was placed on quarantine. She developed a fever the next day and was conveyed to KK Women’s and Children’s Hospital in an ambulance, where she was tested for COVID-19. Her test result came back positive for COVID-19 infection on 31 December. Her serological test result has come back negative, indicating that this is likely a current infection.