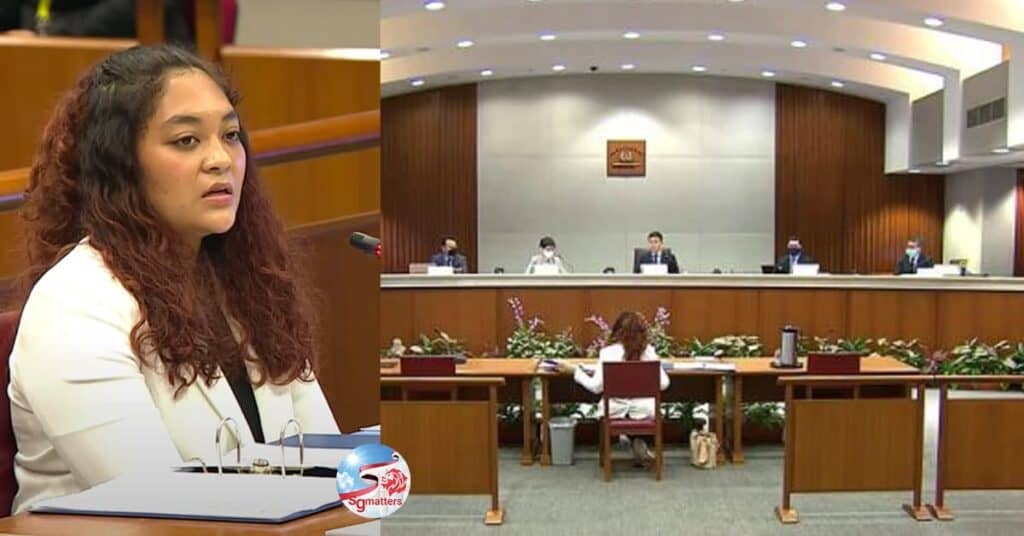 No time to read the report or watch the full recording? Here’s a timeline of the events that took place as revealed at the Committee of Privileges.

At the meeting, Raeesah told them that she had lied in Parliament on 3 Aug, and that she had no way of substantiating the statements she had made. She sought their guidance because they were seasoned politicians.

The 3 WP leaders told her that the best thing for her to do would be to continue with the narrative that she had already given in Parliament on 3 Aug 2021. If Raeesah and the WP could get away with it, there was no need to clarify the lie. If the matter was brought up again, there would also be no need for her to clarify and there was no need for the truth to be told.

After the meeting, Raeesah sent a text message to Ms Loh Pei Ying, her secretarial assistant, and Mr Yudhishthra Nathan, a WP member and told them that the 3 WP leaders had told her to ‘take the information to the grave’.

On 3 Oct 2021 – the day before Parliament sat on 4 Oct – Pritam Singh visited Raeesah at her home.

Contrary to what Pritam said at the party press conference that he had made known to her before the parliamentary sitting in October, that any parliamentary clarification on this matter was hers to make in her capacity as an elected Member of Parliament, Mr Pritam Singh did not ask Raeesah to clarify and state the truth in Parliament. He told her at this meeting that if she kept to her existing narrative, there would be no judgement by him. She was advised that she could continue to lie.

Raeesah continued with her lies in Parliament when questioned by Mr Shanmugam. After Parliament was over, Raeesah met with Pritam and Sylvia Lim in Pritam’s office in Parliament (office given to the Leader of the Opposition). They discussed the next steps which included a possible COP and police investigation. Neither Pritam nor Sylvia Lim asked Raeesah why she lied again, nor did they suggest that she clarified the truth.

Ms Khan received an email from the Police dated 7 Oct, inviting her to assist them in investigating the matters she had raised on 3 Aug in Parliament. She sought advice from Pritam Singh and Sylvia Lim as she was concerned that she would be giving a statement without privileges as opposed to making a clarification in Parliament where she would have privileges.

They advised her not to respond to the Police and to ignore the requests, as the Police could not compel her to speak with them.

By this time, Pritam and Sylvia had come to the view that the matter would not be dropped, and that it was not going to go away. Mr Pritam Singh called a meeting that was attended by Ms Khan and Ms Sylvia Lim.

The three of them discussed together, and decided that Raeesah should come clean and tell the truth. At this meeting, Raeesah asked if disciplinary action will be taken against her and the answer given to her was no.

Separately, Ms Loh and Mr Nathan also met with Pritam Singh in his home in the evening to discuss how to convey the truth.

Pritam Singh, Sylvia Lim, Raeesah, Ms Loh and Mr Nathan of the WP had a meeting at WP HQ to discuss the drafting of Ms Khan’s speech. Pritam Singh and Sylvia Lim were involved in the drafting.

Raeesah made her statement in Parliament to admit to her lies.

Raeesah was shocked and surprised to learn that the WP had formed a Disciplinary Panel (DP) on 2 Nov to look into her lies to Parliament as she had been given the assurance earlier that no disciplinary action would be taken against her.

Pritam Singh and Sylvia Lim suggested to Raeesah at a DP Meeting that she should resign n as a member of the WP. It was suggested to her that this was for her wellbeing and because she no longer had the support of fellow Sengkang GRC MPs.

No one from WP advised Raeesah to tell the truth. Pritam, Sylvia and Faisal had advised her on 8 August to continue her false narrative. On 3 Oct, Pritam told her there would be no judgement by him if she continued with her lie. It was only when it became clear that the matter would not be dropped or go away that Pritam and Sylvia decided together with Raeesah on 12 Oct that she should come clean and tell the truth.

Both Ms Loh and Mr Nathan knew that Raeesah had lied in Parliament on 3 Aug 2021 because she told them on 7 August.

When Ms Khan lied again on 4 Oct 2021, in Parliament, Ms Loh was shocked and scared for Ms Khan.

Ms Loh was not fully happy with the WP statement of 1 Nov 2021, because it did not reveal Pritam Singh’s knowledge of the matter. She felt that the involvement of Pritam Singh, Sylvia Lim and Faisal Manap had been intentionally omitted in the statement and the omission was quite stark.

Both Ms Loh and Mr Nathan were surprised when the WP set up a Disciplinary Panel (“DP”) on 2 Nov 2021.

Ms Loh thought the composition of the DP was self-serving. Pritam Singh, Sylvia Lim and Faisal Manap were the only members of the DP and they were also the very people who had known that what Ms Khan had said was untrue.

Mr Nathan thought that any inquiry should have been done earlier, given that the DP members were aware of Ms Khan’s lie since 8 Aug, and knew that she had repeated the lie in Parliament on 4 Oct.

Agreeing that it was self-serving, Mr Nathan said that it had contributed to an uninformed, biased and jaundiced view of the incident, because it had invited WP members and volunteers to give their views on the incident without revealing that Raeesah had acted with the guidance of senior WP leaders.

Ms Loh and Mr Nathan told the DP on 25 Nov that the CEC and the DP should tell the public the true events that took place. Not disclosing the true events would be highly unfair to Raeesah Khan.

Facebook
Telegram
WhatsApp
Twitter
LinkedIn
PrevPreviousNTWU partners Temasek Foundation to distribute more than 20,000 oximeters to transport workers
NextI could not ask their sons to fight and die for the properties of the wealthy: Lee Kuan YewNext
On Key