Through a series of posts responding to WP Jamus’ and Raeesah khan’s social media posts, former NMP Calvin Cheng exposed the hypocrisy of the WP supporters, first by triggering them while confounding others, before concluding with an expose that left them speechless.

The whole episode began with Jamus posting this: 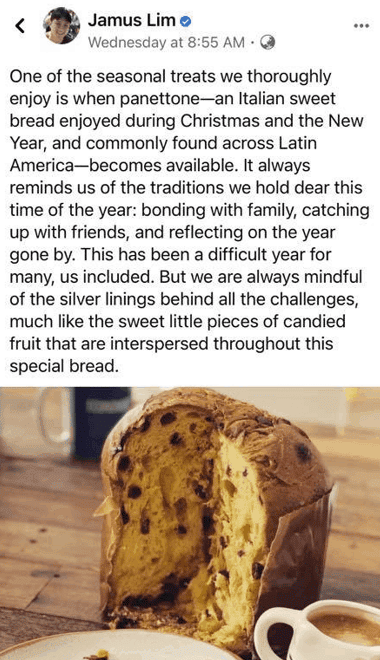 Learned a sweet bread called panettone. Heard that it’s not cheap. A loaf could cost as much as $58.

There is actually nothing wrong with postings such as this. Any MP should be able to post what they eat without fear of social media reactions. BUT, can you imagine the reaction of opposition supporters if a PAP MP posted about enjoying this expensive bread?

The last time when Transport Minister Ong Ye Kung posted a photo showing himself being hosted to lunch by former Transport Minister Khaw Boon Wan, the opposition supporters were busy attacking them for ‘lavish lifestyle’ and ‘expensive wine’ while bemoaning how they could only afford cheap meals at foodcourts and coffeeshops. 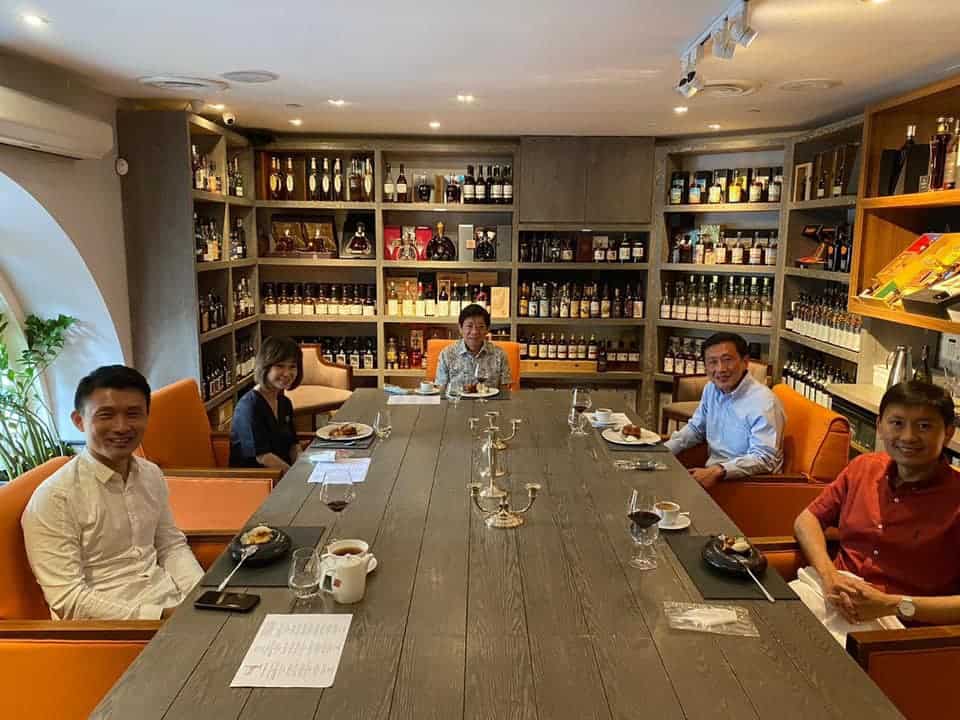 Back to Jamus’ post and here’s Calvin Cheng’s response:

WORKERS’ Party celebrity MP shares with his fans the joys of Italian sweetbread panettone, with a designer espresso, lovingly shot with his latest iPhone 12.
A well-deserved treat after his tireless fighting for the proletariat.
I am looking forward to my kaya toast and kopi siu dai tomorrow morning.
Good night to all you bourgeoise folks ! 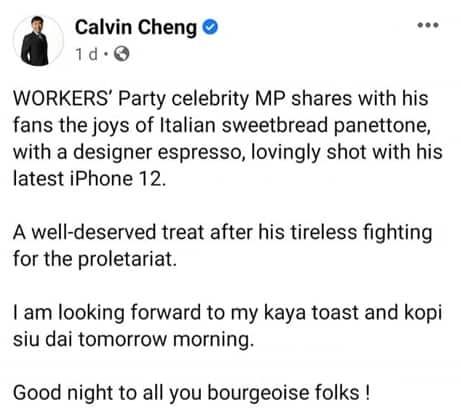 The post triggered responses from angry and defensive Jamus’ fans.  They left Calvin with no doubt what they thought of him and his status.

Unruffled, Calvin followed up on his response with another status.  The definition of a “Champagne Socialist” probably left some none the wiser. 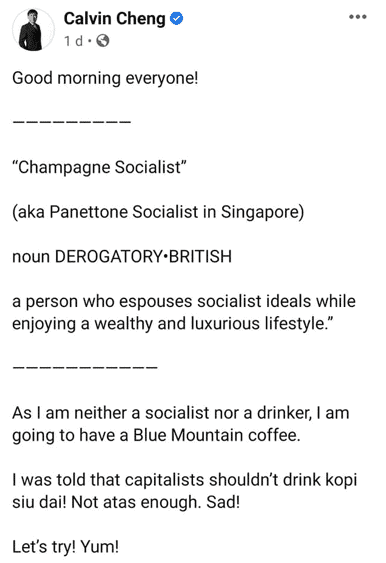 He then followed up with a birthday greeting to WP Raeesah Khan. 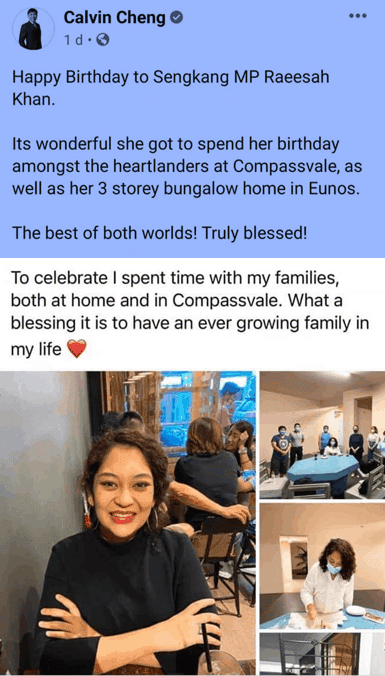 Without fail, he triggered the WP supporters who descended to defend their elected MP.

And finally, after 3 posts and many comments, Calvin Cheng concluded his series with a post titled: “CHAMPAGNE SOCIALISTS AND KOPITIAM CAPITALISTS”

Here’s what he wrote in conclusion:

“In the last 2 days, I made 3 posts about 2 Workers’ Party celebrity MPs.

They were sarcastic and tongue-in-cheek, and part of a series.

This is the conclusion.

Together they tell a story, with a serious message.

I waited a while before telling this story, to see the reaction.

I expected a certain reaction from a certain demographic and I wasn’t disappointed:) (as they say ‘triggered’)

Here is the story.

When the PAP introduced its candidates’ last election, you would have noticed that all of them were at pains to downplay their material achievements, and emphasise their humble roots.

So many said they grew up in rental flats or some other humble abode.

This was a clumsy PR effort by the PAP and poorly executed.

But above all, it was sad.

Sad that the PAP candidates, many who have clawed their way up a meritocratic society, had to downplay their achievements.

Like Mariam Jaafar, arguably the most outstanding Malay person of my generation, who graduated from Stanford with distinction, has an MBA from Harvard, and is now Partner at the Boston Consulting Group.

The PAP probably remembered how Ms Tin Pei Ling was jeered at for having the audacity to like Kate Spade bags, or how Dr Koh Poh Koon stammered when explaining that everybody in his family used a car to get to work (from farmhouse to successful buntut surgeon), leading some to misconstrue him as saying that every Singaporean has a car.

I also remember in 2015 a PAP candidate vehemently denying he was an ‘elite’, despite the fact that he fought his way out of poverty to become a top civil servant.

Yet, when members of the real elite turn up for the Opposition, their (many young and liberal) supporters unquestioningly fawn over them.

So it is okay to be a member of the Singaporean Malay royalty, born with a silver spoon in her mouth, but if you are a bona fide Malay woman who actually had to work, you have to hide it?

This pains my heart.

It is easy to fight for the poor when you were never poor yourself.

It is ok to post pictures of nice cakes that most heartlanders have never heard of, but if Chan Chun Sing wears a Casio watch, it is being fake?

Are we headed down the path of superficial Western politics where packaging is more important than substance?

As some pointed out, just because I (deliberately) said that I was eating kaya toast, it doesn’t mean I am not rich.

And just because a person now enjoys the finer things in life, it doesn’t mean he hasn’t fought tooth and nail for it.

He shouldn’t need to hide it or be taunted for it.

And it doesn’t make him less likely to empathise as a leader.

So today, as we celebrate the Hindu Festival of Lights, let our hearts and minds be enlightened as well.

For those who came to my page full of bile and hatred, I hope your minds will open.

These are the people who, through their naïveté, myopia, their prejudices, and their inability to see past the surface, will be the bane of Singapore.

I have marked most of these people with this comment “Thank you for being my fan!”, even if they hurled vulgarities at me, or scolded me.

For this is my fan page, and even if they attack me, I assume that in the cockles of their hearts, they actually nurse a secret and passionate love.”

As a ‘postscript’, Calvin Cheng wrote: 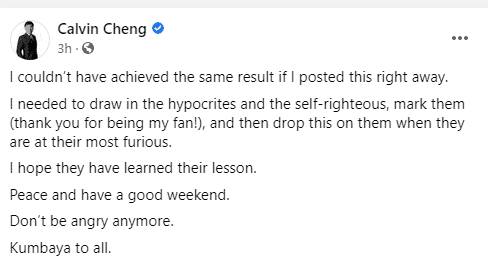