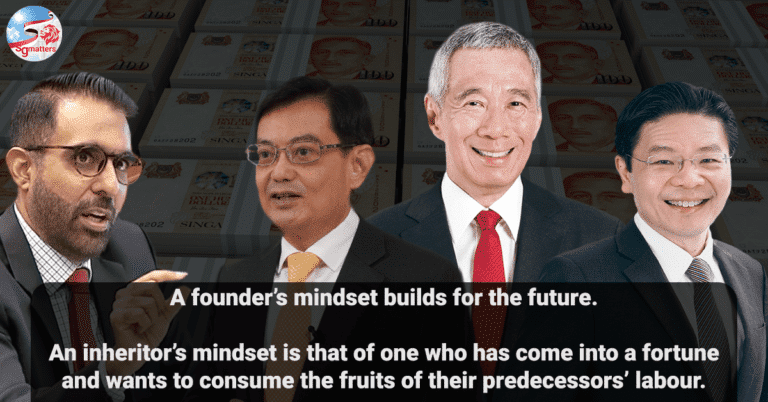 Our Reserves are a critical resource and society, as a whole, must be wise in how we manage this resource so that it is not eaten away over time.

The calls to spend more from our reserves is not a new one. Twenty years ago, there were already calls to stop accumulating reserves and to spend from it, Mr Goh Chok Tong said in a Facebook post.

Thankfully, the Government did not cave in to such pressure, or today, we would have been in a worse state in this pandemic. Governments around the world have committed trillions of dollars in response to COVID-19, and their debt levels have risen to record highs. Such debt will take generations to pay off.

Singapore has avoided this outcome because successive generations have built up strong Reserves ahead of this crisis.

We should be careful not to be swayed by the ‘wealth effect’ – that we are rich, and we can spend more.

Are we rich? As George Yeo once said at a LKYSPP lecture, “For as long as Singaporeans think that the government is rich, they will say look, c’mon, pass some over; But in fact we have nothing. We are only a small island. We have no natural endowments. And what we have – I don’t know how many hundred billion dollars we have – even if you double it, what is that, compared to what others have, in the ground, in land, underwater?”

There must be a sense that the ordinary needs of the Singaporeans must be looked after, and a proper balance between spending for today’s generation and saving for the future generation.

Currently, the Net Investment Returns Contribution (NIRC) from our Reserves is the single, largest contributor of revenue towards the annual budget to spend on Singaporeans. Its contribution is larger than income taxes collected or corporate taxes.  The NIRC for Budget 2021 was almost $20 billions.

Without the NIRC, the Government would have to raise $20 billions through taxes. The Government has been able to keep income taxes low because of the contributions from NIR (Net Investment Returns). Conversely speaking, if we shrink our Reserves, so too will investment returns from Reserves shrink, and therefore, over time, there will be less money to spend on Singaporeans.

Taking care of current and future generations of Singaporeans

How to drain the reserves

Recurrent needs (such as subsidies for healthcare or education) must be paid for by recurrent revenue. If the ‘everyday need for money’ is deemed an acceptable use of our Reserves, then recurrent spending will drain the reserves inexorably.

If the government should capitulate to such demands, then future generations will have a smaller fund to support them when a rainy day hits them.

One argument put forth by Mr Pritam Singh of the WP is that it is alright to spend more from Reserves as long as the principal is not touched.

At the opening of this term of Government, Mr Singh said: “When we talk about the Reserves, we are not talking about raiding them. It is about slowing the growth slope of the Reserves. So, the principal is not touched.”

This is an alluring argument but seriously flawed. Is it good enough as long as the principal sum is not touched? Certainly no, the reason being that at its minimum, the Reserves must be hedged against inflation. Just think. If you have a million dollar today and you invest it and spend every cent of the investment returns while leaving the principal one million dollar untouched. Does your one million still have the same value 20 years later?

We should be very cautious and not delude ourselves into thinking we have enough firepower to handle future crises of any proportion. More firepower is always better than less. No one can guarantee that the value of the Reserves will not fall. In a financial crisis, value can go down as it did during the Global Financial Crisis and that is also the time when money is needed.

We should be mindful not to chip away at the Reserves and erode their strength because that it is the strength of our Reserves, together with the Government’s triple-A credit rating, that allows the government to reduce the cost borrowing for long-term investments. The Government does this by using our Reserves as guarantees to back the borrowing so as to reduce financial costs. This allows the Reserves to be invested for higher returns.

Our Reserves provides long term stability to Singapore’s economy. The Singapore Dollar is as strong at the soundness of the country’s fundamentals. As the size of our economy grows, our reserves must grow at tandem to be able to defend a bigger economy.

A founder’s mindset builds for the future. An inheritor’s mindset is that of one who has come into a fortune and wants to consume the fruits of their predecessors’ labour. We should not draw down on what we have inherited, nor should we mortgage the future of our children. 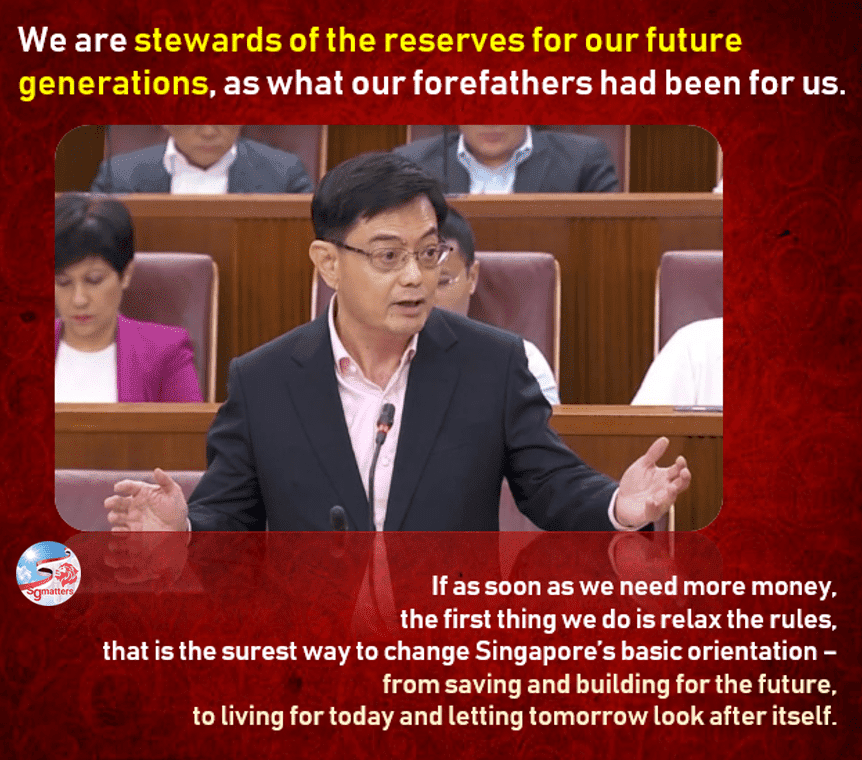 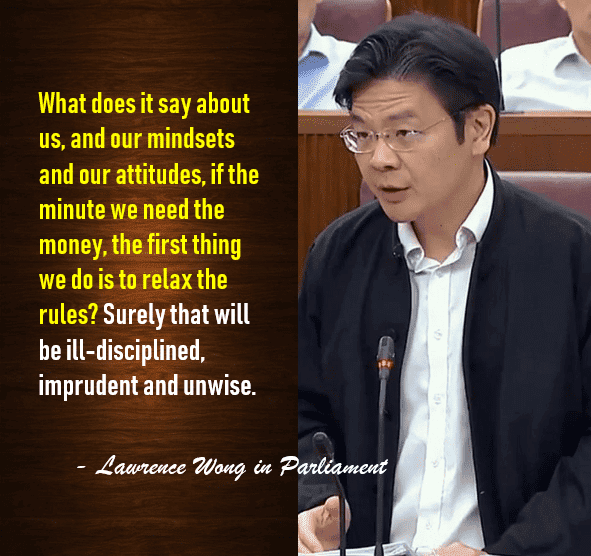 Read also  Do not kill the hen (reserves) that lays golden eggs. Fatten it instead, says Goh Chok Tong