This is about lives, not theoretical musings: DPM Heng to Jamus Lim 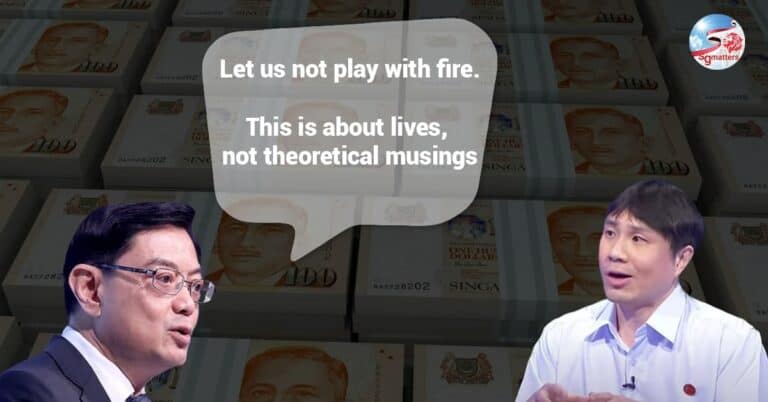 “Let us not play with fire. This is about the lives of our people, not theoretical musings,” DPM Heng Swee Keat said to WP Jamus Lim in Parliament, 26 February 2021.

Mr Heng reiterated that it is not in our national interest to disclose the size of the reserves.

Revealing the size of the reserves is akin to laying bare our defence plan, Mr Heng said. This will diminish the value of our reserves as a strategic defence. No responsible leader would do so.

“So I was very alarmed when I heard Associate Professor Jamus Lim citing theoretical literature that speculation could be stabilising,” Mr Heng said.

Mr Heng reminded Jamus that market-driven short term flows are and will continue to be fickle and extremely volatile. He gave the example of the 1992 George Soros’ speculative attack on the Bank of England by betting against the Sterling pound. The attack dramatically destroyed the UK monetary system.

DPM Heng Swee Keat also described his personal experience during the Asian Financial Crisis. He was at that time the Principal Private Secretary to Mr Lee Kuan Yew. Mr Lee was invited by several countries in the region to share his views, as Singapore was relatively unscathed.

“I sat in all his meetings. It was very painful to see how speculation and the currency volatilities that these countries face was destroying businesses, big and small, and the lives of men and women in these places.”

Foreign exchange speculations have been and will continue to be a threat to economies, especially small, open ones like Singapore. As an international financial centre, portfolio and banking-related flows in Singapore amounted to S$294 billion last year, or 63% of GDP.

“Just last year, we saw extreme capital flow volatility in global financial markets due to the uncertainties and risk sentiments associated with the pandemic. MAS kept the Singapore dollar nominal exchange rate stable during this period backed by the full power of our reserves, giving banks and businesses certainty to make decisions under very trying circumstances.”

The Singapore dollar is one of the most actively traded currencies in the world relative to our GDP with daily turnover estimated at US$37 billion globally, or an annual turnover of US$9.5 trillion. Our nominal GDP is just about US$350 billion.

“I was Managing Director of MAS when the Global Financial Crisis hit the world. My team and I had to not just be alert to the domino effect of the failures of banks globally, but also the flights of capital and the risks of speculation on the Singapore dollar. If we had been attacked, the businesses in Singapore, big or small, and the lives of our workers, would have been severely disrupted. Now, as a Board member of MAS, I want to ensure that MAS is able to continue effectively using Singapore’s exchange rate to deliver price stability. A very volatile Singapore dollar exchange rate, subject to market fads and bubbles, would not ensure low and stable prices for Singaporeans. In normal times, our nation’s reserves also underpin our triple-A sovereign credit rating, thus underpinning confidence in our unique exchange rate monetary policy system.”

“So as a practitioner at the frontline, who tries my best to understand the intricacies of the system, I must caution Associate Professor Jamus Lim – let us not play with fire. This is about the lives of our people, not theoretical musings.”

Read also  Currency speculation can be stabilising for the economy: Jamus 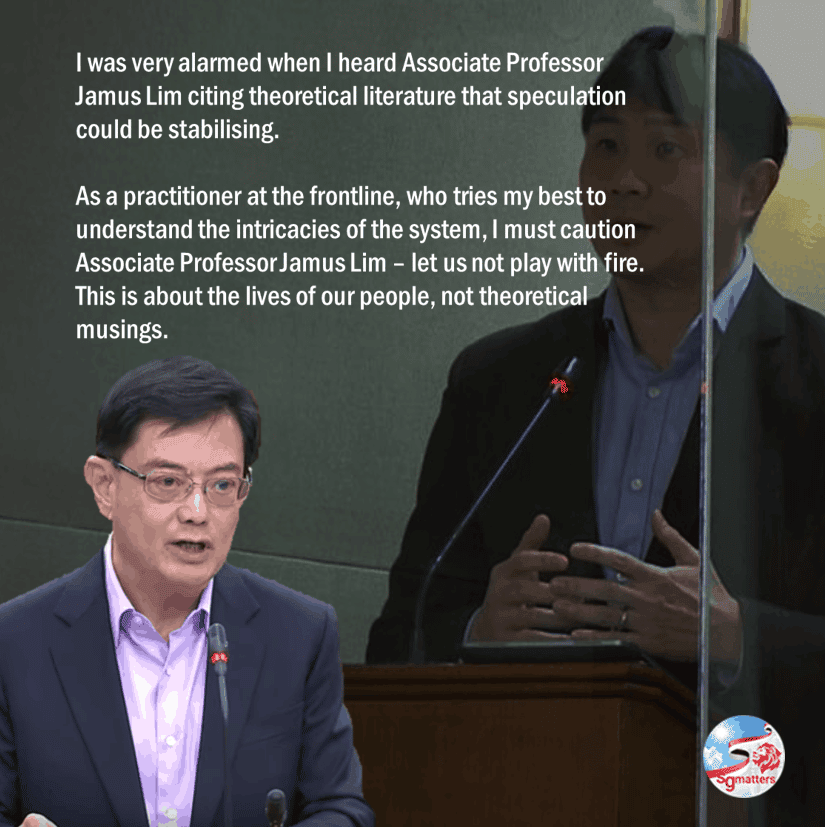 May 13, 2022
PrevPreviousMinimum Wage vs Progressive Wage Model: A Closer Look
NextJamus ignores the sufferings of people hurt by currency speculationNext
On Key