A tale of 2 countries. Can Singapore end up like Sri Lanka? 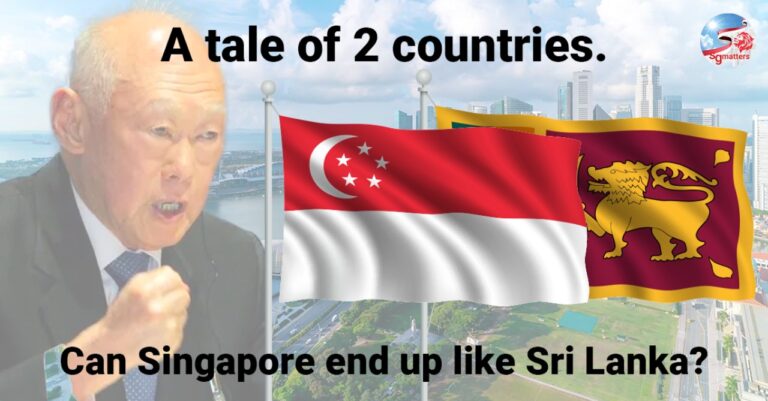 The late Mr Lee Kuan Yew (LKY) once described Sri Lanka as “a better city than Singapore”, and it has “a thick layer of educated talent” and “sterling reserves”.

Tragically, Sri Lanka has been wasting away and badly wrecked, with dwindling supply of life-saving drugs and household essentials, civil unrest, and outstanding default on domestic and foreign debts.

How did such a tragedy happened in modern history?

LKY’s main prognosis of and recommendation for resolving Sri Lanka’s malaise revolved around the arena of politics and getting the politics right.

Can Singapore end up like Sri Lanka? Absolutely, if we consider our opposition’s political manifestos and proposals in the Parliament.

They focused on taxing the wealthy and reduced the number of taxpayers.

According to the recently appointed Finance Minister Ali Sabry, “We have 22 million people in the country and only about 250,000 people paying income tax… You can’t run a country like that.” He is trying to reverse the system but it’s an almost impossible and uphill climb.

For those who have been following the political development in Singapore, does this vein of thoughts and proposal on taxation sound familiar?

Are the opposition politicians who champion similar policies deemed to have a heart for the people and prone to win votes from ignorant, apathetic and self-serving voters?

In addition, Sri Lankan politicians did not focus on restructuring the economy, strengthening competitive edge, and keeping up with the times. Although these are vital issues, they are usually not issues that ordinary persons on the street would grapple with most of the time and they are not key issues that would win their hearts and minds.

Similarly, when was the last time, you read or heard about a comprehensive and evidence-based economic blueprint from SG’s opposition? To be fair, we have heard appealing proposals such as taxing the rich and wealthy.

Unfortunately, the propagators have not thought deeply enough about how these taxpayers have more resources to shift their private wealth, domicile their intellectual properties, and relocate their tax bases in far more and faster ways than mainstream tax payers.

Sadly, Sri Lanka put the nail on its coffin by tapping on its foreign reserves to support its national expenditures.

Just like taking drugs, dipping into reserves could be addictive and once started, it would be hard to stop the next politician from wanting to draw more from the reserves to give to the people and look good to the electorate.

Isn’t that what our opposition politicians have been pushing for in their political campaigns and since getting a seat in the Parliament?

Can you understand why they can’t even come clean, tell the truth, and run a Town Council properly without wasting away $33 million?

To sum up the opposition’s manifestos, the government should not increase taxes or prices, give more to the people, and tap on the reserves to support national expenditures.

Any little boy and girl can make such proposals. Vote for me and I promise to do better for you.

In reference to the latest report about Sri Lanka by the IMF, Straits Times’ Associate Editor Vikram Khanna wrote that Sri Lanka’s politicians are “still in fantasy-land”.

Make no bone about this, these politicians are mature and well-educated – and no less credible and competent than any of SG’s opposition politicians.

Can our politicians be drawn to their own version of fairy-land in order to win votes and capture power? Will the flood gate for well-oiled and appealing propaganda, promises and pitches be opened to entice voters, including doing so in the name of check and balance?

Will there be more populist measures and more politicians trying to out-beat one another to give more and more to voters and get them to pay less and less taxes?

“You just read the utter, lunatic things the Opposition candidates say. If ever these people came into power, even God cannot help you from disaster. They are going to give you flats for free, medicine for free, everything you can ask or think of … There is no need to pay. In fact, there is no need to work. We can all go home and sit under the banana tree.”

Will Singapore take heed of these words or end up like Sri Lanka?

Will Singaporeans cast a vote for the opposition and believe that it’ll never topple a good government?

May 13, 2022
PrevPreviousWhat Singaporeans say of Lawrence Wong as leader of the 4G team: a new era with a new leader
NextThe Independent Singapore (TISG) pofma-ed over deceptive clickbait article on K ShanmugamNext
On Key