A Story of Two Union Leaders and The Jurong Island Initiative 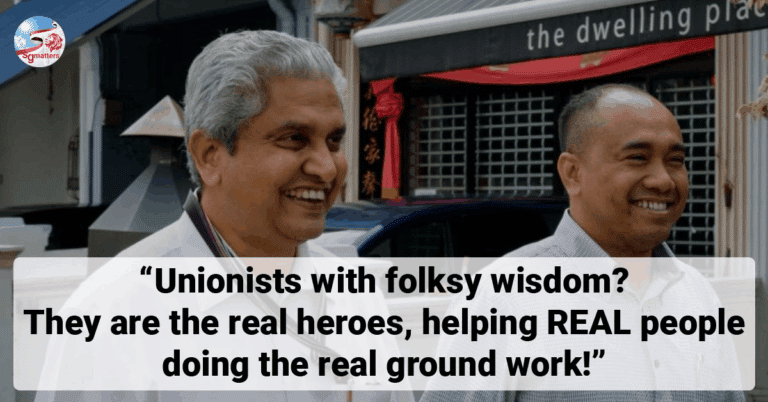 It was a rainy evening when I caught up with Mr K. Karthikeyan and Mr Muhammad Aswadi Salleh. A friend in the petroleum industry had told me about a lovely job-matching initiative that started on Jurong Island and have been ongoing for many, many years. Decades.

“Gotong royong, the mutual support and community spirit is beautiful,” that’s what she said.

Brother Karthi and Brother Aswadi are both union leaders of the United Workers Petroleum Industry (UWPI). Among many other welfare initiatives, they had spearheaded a ground-up initiative in matching jobs for workers in the petroleum industry.

Brother Karthi started doing union work full-time in 1988. In one instance, he was able to fight for that year’s bonuses and even got the bonuses backdated to 1986! That was when he realised that workers do appreciate the work that Unions do.

Over the years, he has turned down many, many better-paying job offers to continue being the General Secretary of UWPI. Over the decades, he has also groomed younger union leaders as part of succession planning. Currently, Brother Karthi continues to serve union members and workers in the petroleum industry as the union’s Executive Secretary. It is evident that union work has given him a sense of fulfilment like no other.

One of Brother Karthi’s mentees, Brother Aswadi is now the General Secretary at UWPI. Brother Aswadi is also no stranger to union work, having stepped up to serve since 1995. Over the years, he has won over union members and management with his humble personality and consultative approach. What came through distinctly from our 3-hour chat was how good a listener and how positive Brother Aswadi is.

Case 1: The Forklift Driver Who Lost A Limb

Brother Karthi and Brother Aswadi told me about a worker who had to amputate his leg due to diabetes. He had gotten a cut at work that he failed to take care of. The two union leaders were told that this wouldn’t have been covered under the Workplace Injury Compensation. Still they could not turn away from this worker who would lose his job as a forklift driver!

They wrecked their brains, thinking of ways to support the worker.

“Take him back,” they pleaded with the company’s HR department.

“He’s a forklift driver, how can he work without one leg??”

“How about some compensation? He did get injured at work!”

“Wait, how about giving his daughter a job?”

Well… Guess what? The company actually created a role for the union member’s daughter with a way higher pay than what her dad was getting! This is but one of the many cases where Brother Karthi and Brother Aswadi have fought hard for rights and benefits for their union members. And this, is only possible because of the strong relationships and mutual trust they have built with the members and their companies’ management over the decades.

The smiles on their faces as they recounted the incident gave me goosebumps.

Lesson one: The joy of helping people can be more rewarding than anything.

Brother Karthi told me about this particular case where the worker almost lost his job as he had to go to jail for 8 months for a drink-driving offence. Brother Karthi pleaded with the company to keep him and they relented eventually. “There are compassionate companies out there after all. Last I heard, at the union member’s Dinner and Dance, he didn’t even drink at all. Sometimes when you give people second chances, they are really appreciative and they do way better,” he shared, smiling.

A win-win for workers and companies.

When they are not helping to resolve grievances, listening to union members or negotiating with companies in fighting for workers’ welfare, Brother Karthi and Brother Aswadi spend their time poring through numerous resumes to do job matching for the union members under their care.

“It’s easier and far more effective for us to do it. We know people and we have built relationships. I know my members’ skillsets and can match them to the right jobs where they can perform. I even have people from other industries coming to me, I send their CVs to other contacts of mine, banking or what. Just help if I can!” Brother Karthi chirped.

Brother Karthi also recounted the times when workers go to them with gripes about things like “the food not nice, uniform not nice”. To them, he will try to manage expectations.

On Recognition for The Work That Unions Do

In a recent Parliament speech, Workers’ Party Jamus Lim spoke of the “folksy” wisdom and beliefs of labour union leaders, and implied that their wisdom is akin to those of the 16th century who once believed the sun revolved around the Earth. 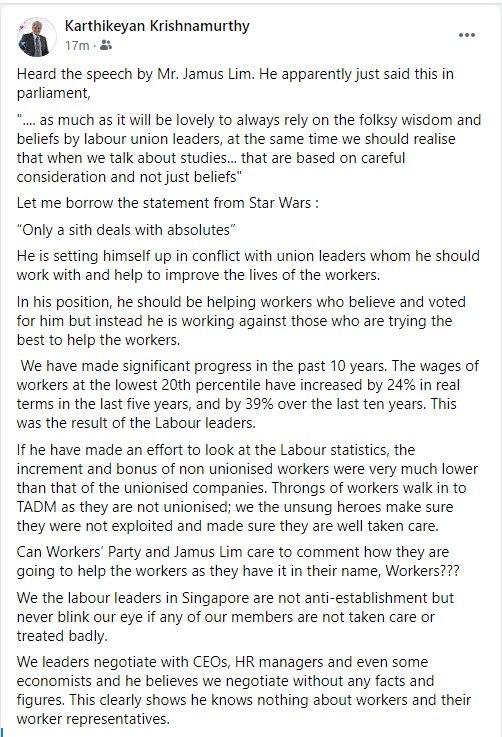 Indeed, for someone who is hardly on the ground doing real work with real workers, it is easy to dismiss the sacrifices of veteran union leaders who volunteer their time for years and years fighting for workers!

Do we need more armchair critics, basing their policies off studies and theories?  This politician’s sore lack of understanding of actual union work is telling.

When they help union members, most of the time, only the beneficiary’s family knows.

“You see, when we help someone, we really don’t need recognition. To see them happy again, that’s all the reward we need.”

And this seems to run in Brother Karthi’s family. His eyes lit up with pride when he shared how his daughter once told him to donate her entire 21st birthday party budget to the needy. She was on an overseas volunteering trip helping tsunami victims then. One year later, his son did the same. An apple doesn’t fall far from the tree indeed!

Union work is often a thankless job but nevertheless, fulfilling. Brother Karthi recalled how he once negotiated a more than half a million retrenchment and retirement package for a union member –a manager. The worker was upset though, “The union is useless. This is not enough.”

“What to do… But I don’t do things for the gratitude lah. I don’t need the ‘thank you’ really,” he shrugged.

This chill vibe contrasted with the times when he got really agitated during our chat, recounting how frustrating it can be when they could not get through to help some workers who were mistreated and when they can’t fight for more and better.

Brother Karthi went on to share how Brother Aswadi is always contacting him about union work. Brother Aswadi does shift work, and on his off days, he is always very preoccupied with union work. The two call one another over workers’ issues at all hours of the day. To an outsider like myself, the sacrifice union leaders make to ensure workers’ welfare is taken good care of is incredible.

But looking at the light in their eyes and the smiles on their faces as they share of the many, many inspiring and touching stories, it doesn’t seem like a sacrifice to them at all!

We need this fire and passion in more union leaders to continue to protect our workers in Singapore, especially during this time when our workers are hit hard by the brutal Covid-19 economic fall-out.

Once in a while, if you are lucky, you meet people who really inspire you – to do better for others, to be better. And these two gentlemen, taught me the art of negotiation, gratitude, sacrifice, how to be tougher, and most importantly, how to have more heart, all in one rainy evening over Zoom.

3 hours is not enough. Some stories, you never get tired of listening.

Thank you, Brother Karthi, Brother Aswadi, and all our Unions for all that you do for our workers in the various industries. Union work is often invisible, but the lives of workers and their families that you have uplifted bear the real value.

Gotong royong. That’s what we need during this time of national crisis.

May 30, 2022
PrevPreviousMajority of Singaporeans remain open to foreigners; only a small percentage feels negative towards foreigners: REACH
NextIs it true that all jobs offered in Singapore are not good jobs?Next
On Key 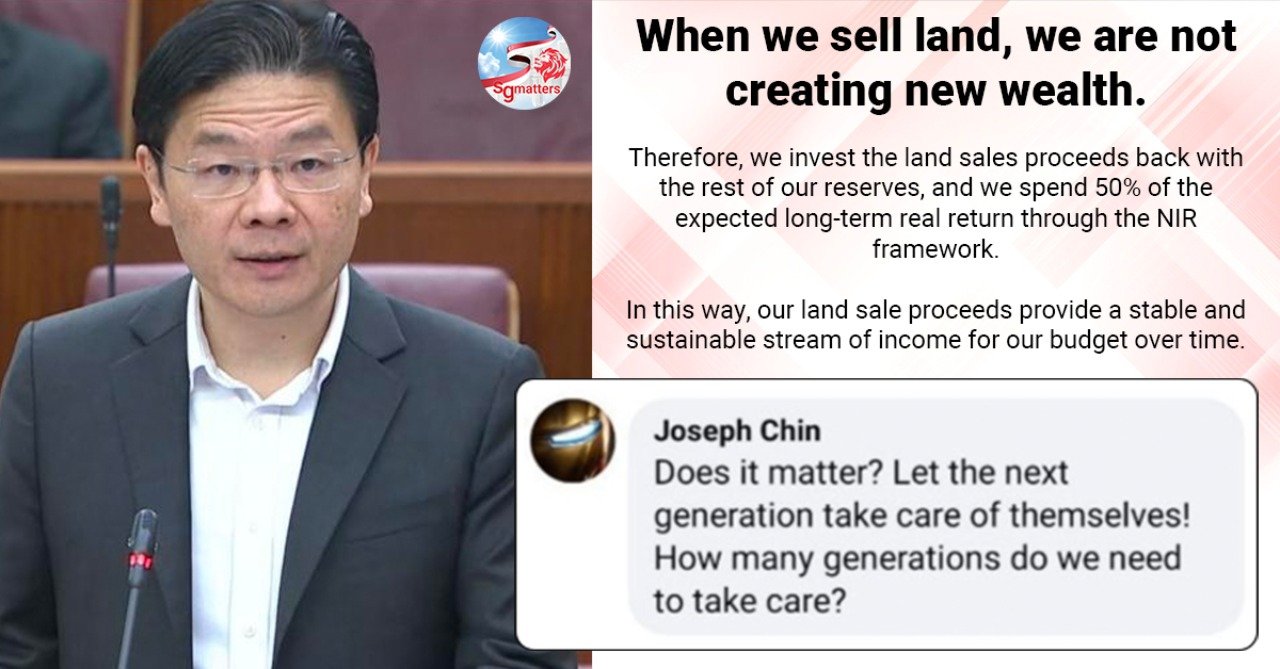