Skip to content
Home » 4G Leadership: why you can put your confidence in Chan Chun Sing
Politics

“We cannot save every job and every business, but we will take care of every Singaporean. We will not let widespread unemployment erode the confidence and dignity of our people.”

A common thread running through Chan Chun Sing’s speeches is the expressed determination to ensure a successful and enduring Singapore for many generations to come.

Mr Chan is currently Minister for Trade and Industry and Minister-in-Charge of the Public Service.  With effect from 15 May, he will move over to helm the Education Ministry. He drives a Toyota Prius and wears a Casio watch he had from army days.

The son of a machine operator and a President’s Scholar from Raffles Junior College, he said in an interview after his A-level results that his poor background made him determined to succeed.

He rose through the ranks to eventually become Chief of Army before entering politics in 2011.

He was promoted to full minister in 2013 and took over the portfolio of social and family development. He was also the Second Minister of Defence at the time. He also served as the labour chief from 2015 to 2018, leading the labour movement in its tireless fight for workers’ rights.

“We are going to serve all working people”

As chief in NTUC, he said:

“We are going to serve all working people in Singapore regardless of whether you call them PMETs or rank-and-file and so forth. It’s our duty to take care of them. People move fluidly in between jobs and we shouldn’t have this artificial divide as to who is considered rank and file and who is considered PMEs.” (Nov 2017)

He thus moved for NTUC to amend its Constitution to represent not just rank-and-file workers, but also PMETs and freelancers.

With the amendment, PMETs and freelancers are now able to seek the help of unions. He also led efforts to curate and deliver timely and relevant training for workers.

Ensuring undisrupted food supplies in a time of disruption

When countries went into lockdown, when Malaysia declared a state of emergency and shut their borders, Mr Chan assured Singaporeans that our supply chains are continually being diversified and strengthened. He said:

“We are quietly confident but not complacent.”

Our supermarkets remain well-stocked and our essential supplies not disrupted despite lockdowns in many countries.

Upholding Singapore’s reputation and rule of law during the pandemic

“Regardless of the challenges, we will continue to uphold Singapore’s reputation as a trusted hub for investments and business.

“We have not succumbed to the pressures of applying trade restrictions, export restrictions even in the most difficult times. We did not impose export controls. We allowed companies based here to fulfil their global supply chain responsibilities. These have put us in good stead and when people look at where to plant their future investments, Singapore will come to mind.” 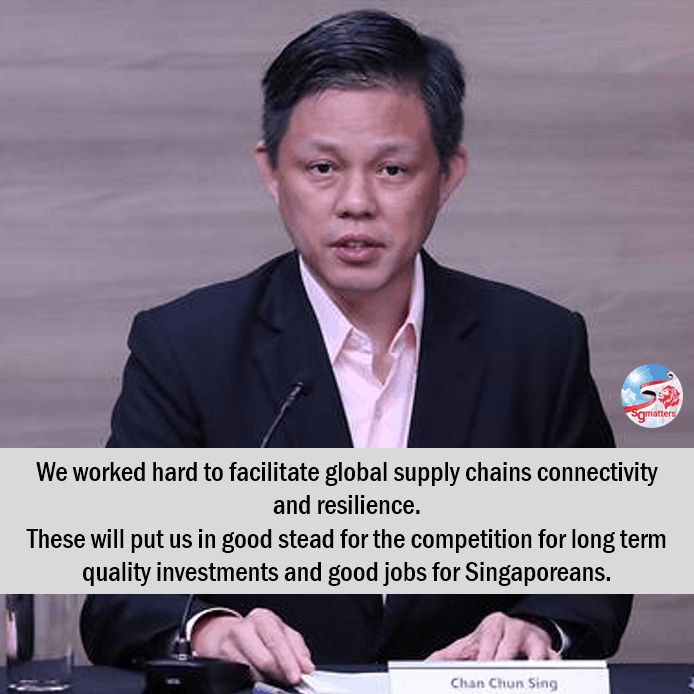 Mr Chan said, “Our efforts to keep our borders open, maintain external connectivity and ensure business continuity have given global companies the confidence to continue to site their projects in Singapore.”

First digital economy agreement concluded and signed during the pandemic

Singapore’s first digital economy agreement – DEPA (Digital Economy Partnership Agreement) – was signed with New Zealand and Chile. The agreement was substantially concluded on 21 Jan 2020. It was signed electronically on 12 June 2020 in the midst of the pandemic. 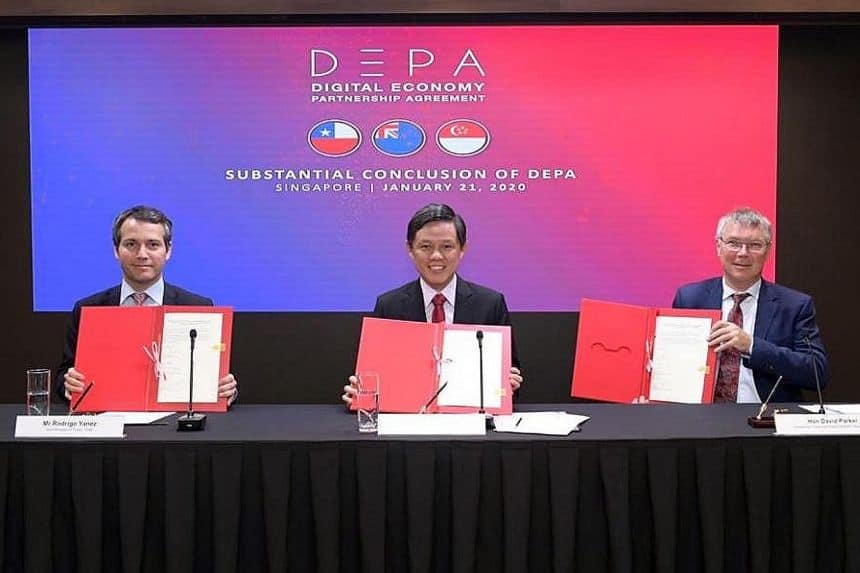 Mr Chan said, “The COVID-19 pandemic has greatly accelerated the pace of digital transformation globally. As more businesses carry out their activities in the digital sphere, agreements such as the DEPA will be even more critical in helping businesses transact and trade seamlessly.”

Posted to Indonesia after birth of his first child

Mr Chan served with the Singapore Armed Forces (SAF) from 1987 to 2011. He was army attache for 2 years in Indonesia. He was posted there after the birth of his first child.

“I was posted to Indonesia 30 days after my first child was born. For the first three months of my first child’s life, I was the weekend father. I came back to Singapore on Fridays on the midnight flight; I flew back to Indonesia on Sundays on the midnight flight. Very irregular. For the first year of my child’s life, she was flying back and forth. At the time, Indonesia was quite chaotic because it was after the fall of Suharto.”

He learned to speak Bahasa Indonesia when he was there. He learned it on the streets and learned it well enough to be very functional and could go into a meeting to discuss geopolitics and economics with the Indonesian counterparts.

His soldiers will ‘chiong’ for him

He said he learned the word ‘brothers’ in the army, long before he joined the labour movement. His soldiers are his brothers. They will ‘chiong’ with him.

“My soldiers were the ones who told me, ‘Sir, don’t worry. Anywhere you go in Singapore, our brothers will take care of you.’”

He excelled as a student at the US Army Command and General Staff College in 1998, and was the first foreign student to be conferred the “Distinguished Master Strategist Award” in the same year.

He believes that successful people should not live life too differently from the common man.

“Walk the ground, know our people”

“The world is becoming more complex. We cannot expect to know everything, if we do not venture out. We cannot preach agility, when we do not practice it. We cannot develop policies and rules for tomorrow, when we do not know how society and the world operate beyond the Public Service. We must walk the ground, know our people, our stakeholders and our businesses even better.” (2020)

At the Ministry for Social and Family Development, he elaborated on a two-pronged approach to deal with social mobility and the challenges of an evolving family support system (where families are smaller and children may not live with their elderly parents) and an ageing population.

The first was to continue to invest in the foundation years of our children, to provide them with the best opportunities to fulfil their talent, regardless of their starting point in life. The second is to build a future ready social service sector.

Inducted into the U.S. Army Command and General Staff College International Hall of Fame in 2013

A little known fact is that Mr Chan was inducted into the hall of fame of the United States Army Command and General Staff College, considered by many as the intellectual centre of the US Army. 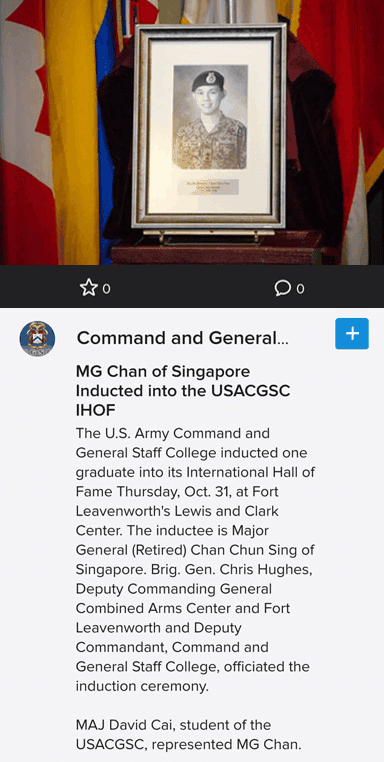 He’s someone you can identify with. 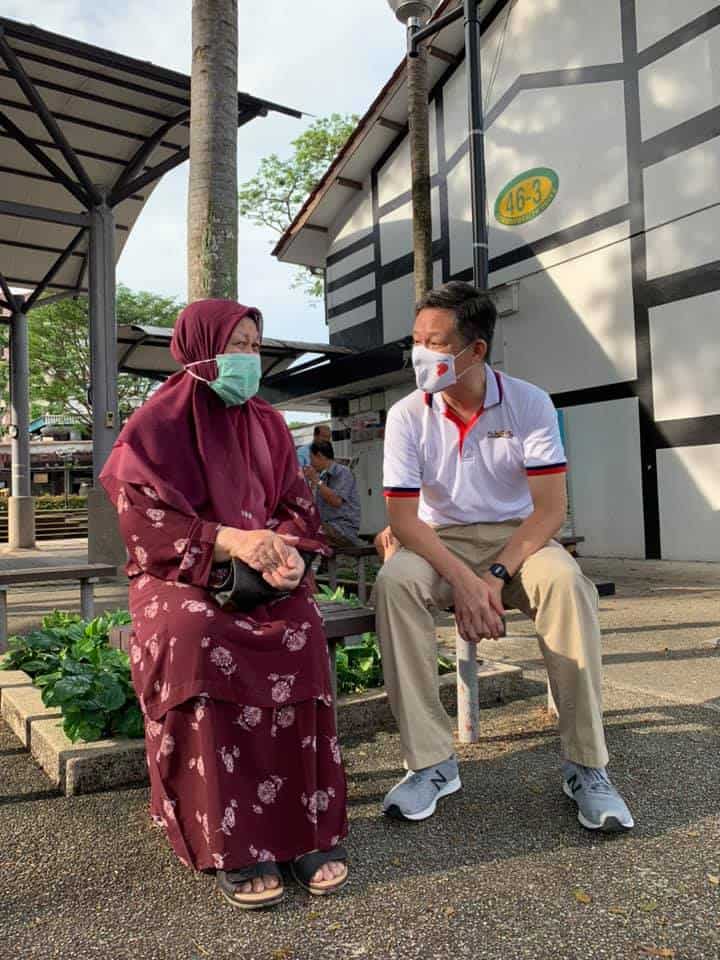 His vision for Singapore

He has only one simple vision for his entire life’s work.

“I have one very simple vision, and that is for Singapore to defy the odds of history, to survive and thrive as a small city state without a natural hinterland. To survive and thrive where we may not have a common ancestry, race, language and religion. That we can define our identity based on a forward-looking set of values of multiculturalism, meritocracy, incorruptibility. That we will define a future where the future is in our hands, and we are not beholden to others nor held ransom by others.”

What must not change according to Chan Chun Sing: values

He said, “While many things will need to change, our values must never change. Service – To put Country before Self. Integrity – To always be true to ourselves and our people. Excellence – To define success not by how well we do individually or for this generation; but by how well we enable the next generation to do even better than us.”

On his appointment to the Ministry of Education, he said:

“I look forward to continue serving our country in my new role at the Ministry of Education, Singapore. The professionals in MOE and my predecessors have built an internationally-recognised and renowned education system.

I am also a beneficiary of this system. Given my family circumstances, I managed to pursue what would otherwise be just a dream – getting a good education. Many Singaporeans have their own stories too. This is what makes Singapore special – that everyone can have the opportunity to do justice to our respective gifts and in turn pay it forward to the next generation.

Everyone will have opportunities in life; from pre-school to tertiary education, and now more important than ever before – lifelong education. I will build on this system of ours to enable every generation of Singaporeans to realise their aspirations, whatever their starting circumstances and stations in life.”