265,000 Construction, Marine Shipyard and Process (CMP) Foreign Workers given nod to work; Authorities on track to clear all dormitories by 7 August

265,000 of them have been given the Green AccessCode which allows them to return to work. These are workers from the construction, marine shipyard and process sectors. 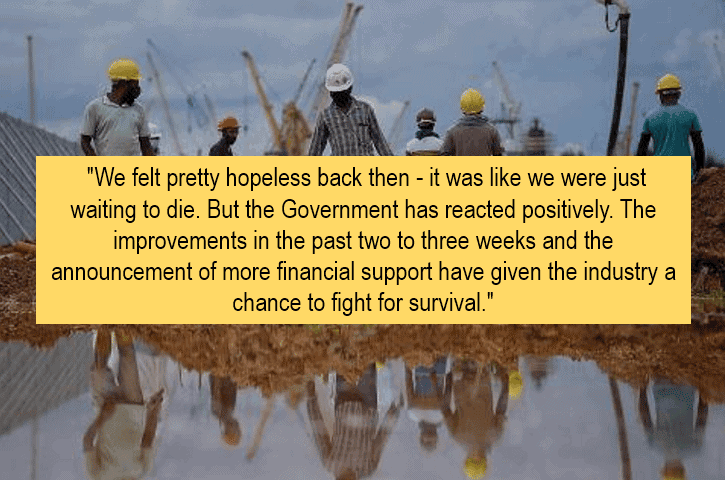 Mr Thomas Oh, director of Beng Khim Engineering and Construction, is relieved that about two-thirds of his roughly 300 workers can head back to work, though a small number still face some issues owing to Covid-19 restrictions.

Mr Oh is among more than 100 sub-contractors who had written to the Government in June about issues faced by the industry, including financial difficulties.

Read also  Migrant workers to be tested every 14 days: MOM

In response, MOM announced last Saturday that the Government will give a full waiver of the foreign worker levy for three more months, and more levy rebates to firms in the construction, marine shipyard and process sectors.

Mr Oh said: “We felt pretty hopeless back then, it was like we were just waiting to die. But the Government has reacted positively. The improvements in the past two to three weeks and the announcement of more financial support have given the industry a chance to fight for survival.”

In a separate statement, MOH said that the Inter-agency Taskforce will complete the testing of all workers in the dormitories by 7 August 2020.

This means that all the dormitories will be COVID-cleared, with the exception of several standalone blocks which serve as quarantine facilities.

As of Tuesday, 127 more dormitories have been cleared of Covid-19, bringing the total cleared to 1,109 dormitories and 52 blocks for recovered workers in 14 purpose-built dormitories.